Starting from the bigger picture (Italy) and looking at the Istat data, it is clear that tourist arrivals in Italy are characterized by a positive trend. In 2015, arrivals at tourist accommodation establishments increased by 2,7% and the number of nights spent by 1,9%, compared with the previous year. Moreover, in the 2015 UNWTO ranking of the most visited countries (in terms of international tourist arrivals), Italy was in the 5th place, after France, USA, Spain, and China.

In 2014, the average length of stay for the first time became less than 4 days, probably due to the economic crisis that forces Italians to reduce the days of vacation.

In 2015 the situation is quite the same, with an average length of stay of 3,8 days. Luckily, the Province of Ravenna stands above the average (Figure 1), registering a 4,5.

Analyzing the distribution of tourism flows under the point of view of the tourists’ origin, we detect a clear dominance of Italian tourists (73,1%), mainly from Lombardy (26,6% of Italian market) and Emilia-Romagna (19%). The general trend is positive. Regarding foreign tourists (Figure 2), they represent the 26,9% of the market, and lately they are increasing in Ravenna. In the first place we find Germany with 423.586 arrivals, in the second place China with 284.648 arrivals, followed by France with 228.885 arrivals. 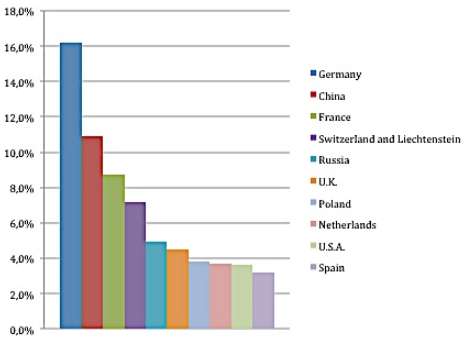 During the year the tourism flows are mostly concentrated in the May- September period (67,2% of arrivals, which corresponds to 5.667.672 tourists); the peak is recorded in August (17,9% of arrivals, 26% of presences), but July, the month preferred by foreigners, is very close in numbers (16% of arrivals, 22% of presences). These data reflect the strong seasonality that characterizes the Emilia- Romagna region.
Regarding the distribution of tourism flows across the different provinces of Emilia-Romagna, it does not differ too much from the one of the previous years (Table 3).

Table 3 The distribution of tourism flows across the provinces

In the province of Ravenna, compared to 2013, we notice a 4,5% growth in arrivals (Figure 3) on one hand, and a contraction of presences (-1%) on the other hand (Figure 4). Ravenna’s tourism demand will be explained more in details in the next paragraph. Another good news is the positive trend of B&B tourism flows all over the region.

The survey "Customers’ flows in hospitality", conducted by Istat and carried out on a monthly basis, records, for each month and for each municipality, arrivals and presences of Italian and foreign customers according to the category of operation, the type of structure and the origin (by country of residence in the case of foreigners and by province and/or region of residence in the case of Italian customers). 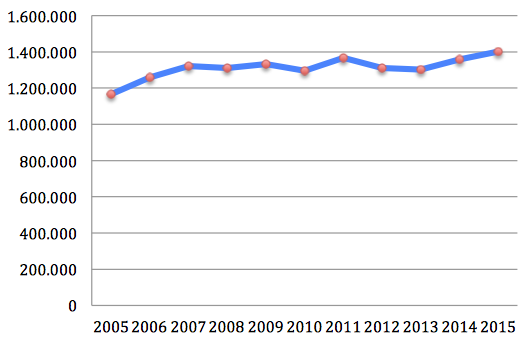 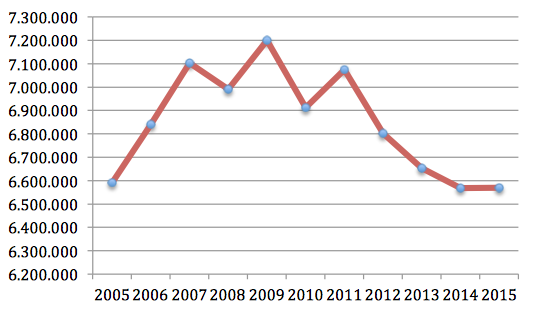 In the time span that goes from 2005 to 2014 a 14% growth in domestic tourist arrivals is registered. With regard to the foreign arrivals the growth percentage is higher (about 30%), even though the absolute numbers are significantly lower (Figure 5).

About the origin, domestic tourists come mainly from the North of Italy (Lombardy and Emilia-Romagna alone constitute the 65% of the total), while foreign tourists come for the majority from Germany (29%), Eastern Europe (25%), and Switzerland (12%). Looking back at Figure 2 [First 10 Foreign Markets for Emilia- Romagna (2015)], the percentage of the first three foreign markets for Emilia- Romagna that choses Ravenna is: the 14,9% of the German market (German tourists mainly go to Rimini, but their second choice is Ravenna), the 1% of the Chinese market (Chinese tourists prefer Bologna and Parma), and the 10,7% of the French market (for French tourists Ravenna is the fourth choice after Rimini, Bologna, and Parma).

Focusing on the year 2015, what is important to highlight is the overall growth in tourist arrivals, reaching the record with 1.402.144 (presences instead are pretty much equal to the ones of 2014). A more detailed analysis on monthly data (Table 4) shows significant percentage increases in five months compared to 2014. Another significant increase is registered for coastal tourism, with a +5,12% difference compared to 2014 (Table 5). 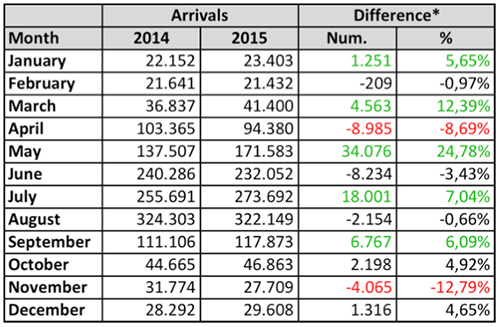 Guests of Italian B&Bs are aged between 25 and 55 years in almost all cases (96.5%). Their average age is shifting toward the more mature segment: the 25/40

The majority of Italian guests comes from the North, followed by the Center and the South. Less arrivals from the islands, probably due to the serious territorial discontinuity that Sicily and Sardinia suffered for decades. Foreign guests represent the 45,4% of the total and arrive, in order, from Germany, France, UK, Netherlands, Switzerland, Austria, Spain and the USA. 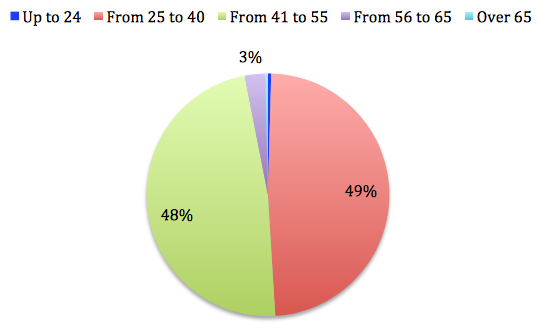 The consumer who choses the Bed & Breakfast over more traditional receptive structures is the one who looks for an authentic, local touch. In fact, since the 1988 “Bed and Breakfast Industry Survey and Analysis”, the number one reason in the rankings of motivations for choosing a B&B has always remained the same: the personal touch.

The three most popular information sources are the Internet, recommendations from friends and family, and guidebooks. Location and availability of amenities are the most important features influencing the selection of a B&B. Leisure is the primary purpose for frequenting a bed & breakfast. The typical bed & breakfast guest is well educated, a business professional, and in the upper percentile for annual income.

On the 29th of June 2016, a seminar on “Tourism Statistics for the Third Millennium” was held in the Chamber of Commerce of Ravenna. The main speaker was Rossella Salvi, who works for the Emilia-Romagna Region. She talked about “TURISMO 4”, a 3-year-old project with statistical aim that should facilitate the collection of data on the characteristics of tourists, thus supporting the tourism- planning job. Each receptive structure in the Region should sign up (for free) and communicate a variety of information about the tourists it hosts. This would help both the owners of the structures (for example for improving their promotion) and the Region (for better planning all the tourism activities).

In Ravenna the total number of receptive structures is 1.167, of which only 39 (3,3%) communicate the required data about tourists through the “TURISMO 4” platform. In Parma, 45 out of 805 structures do it (5,6%). In Bologna 60 out of 1.474 (4,1%). If we consider the whole Region, there are 9.219 structures in total, of which only one third collaborates with the project. During 2015, in the more than 9000 accommodation structures located in Emilia-Romagna, through the data acquisition channel “TURISMO 4”, information has been gathered on a sample of 4.346.180 tourists, equivalent to 44.7% of total regional demand (9.732.848). The bad news is that not only Ravenna entered the program in 2015 (it has been existing since 2013), but also it recorded information on a slice of tourism demand that represents the 7% of the total demand.

For these reasons, it is hard to define the characteristics of the different tourism segments in Emilia-Romagna/Ravenna. Table 6 shows the general segmentation of demand for Emilia-Romagna:

Table 6 Segmentation of Demand in the Emilia-Romagna Region

The 58,6% of tourists goes on holiday with his/her family, the 21,1% goes on his/her own, while the remaining 20,3% chooses to go with a group. Families and groups on average spend four and a half days in the destination, whereas lonely travellers only three. There is a fairly clear prevalence of the masculine component: 54,8% men and 45,2% women.

With regard to the means of transport, tourists mostly use the car (82,9%), followed by the bus (7,3%), the airplane (4,7%), and the train (4,6%). The predominant motivation for travel has always been and keeps on being the need for the famous 3 “S” (sea, sun, and sand), which characterizes the 87,4% of the tourists that choose Emilia-Romagna as a destination. Our Bed & Breakfast would be located 20 minutes (by car) away from the seaside, so we could be a great option for staying close to the coastal area without having to pay the high fares of the receptive structures in Cervia/Milano Marittima. 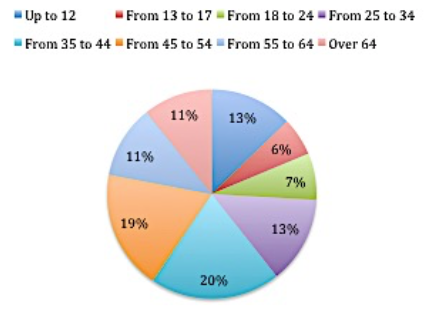 We consider as the most important target those tourists that love the countryside and its peacefulness, especially from Italy. We would like to target also tourists from Europe and the United States (it is well known how American people love Italy and its dreamy landscapes; Italy is the 6th most visited country by Americans, with the UK and France being the only European nations visited more often), but in order to do so we would need to buy some space (e.g. one page) in a foreign tourist guide, which would annul our profits (see financial part). The reason is the law prohibition for Emilia-Romagna Bed & Breakfast owners to promote their structures on platforms that retain a percentage from the revenue, such as Booking.com.

Villa Teresa’s target market strategy is based on becoming the customer’s first choice in Emilia-Romagna, especially for nature-lovers who would like to meet new friends. The target markets that we are going to pursue are made up of people looking for a place to relax and recharge. Our customers will be nature-lovers from eighteen to sixty years old.

It is possible to make a distinction based upon the primary motivation of these tourists: (1) peace and nature as a primary motivation for travel, with the core aim of relaxing and visiting a little; (2) peace as a secondary consideration; places to visit in the area are the primary motivation for travel and the natural environment comes after that. Our aim is to attract and satisfy both types of tourists and, with reference to the second type, in particular those who are intentioned to spend their vacations in the Emilia-Romagna Region.
Considering all the information about tourists of B&Bs and tourists of Emilia- Romagna and Ravenna, and adding the information extrapolated from a telephonic survey I personally conducted on a sample of 20 B&Bs in the area of interest, the main segments that we will address are the following (in order of importance):