2.2 - The controversial Italian situation in the Bed & Breakfast field

First of all, before analyzing the differences in the regulations of the various Regions, it is necessary to list the key elements that define and distinguish the Bed & Breakfast from the other accommodation forms:

Let us now review the striking differences among regional legislations in the Bed & Breakfast field (Table 2). Leaving aside the Toscana Region, which only contemplates affittacamere in its legislation, the most evident discrepancy is in the number of opening days allowed; in fact, Emilia-Romagna operators can only run their activity 120 days per year, while in Lazio the limit is 300 days. In Piemonte, Puglia, and Basilicata the threshold was set at 270 days, in Liguria at 210, and in the remaining Regionsâ€™ legislations it is not specified, which translated means no limitations.

The number of rooms is the most homogeneous datum, with most of the Regions having set a maximum of 3 rooms to be rented to guests. As for the number of beds, instead, the differences are clear, passing from six, to twenty (in Sicily), to not specified. Only the Regions Piemonte and Puglia regulated also the entrepreneurial form of B&B, giving operators the choice of opening a VAT account and offering more services. 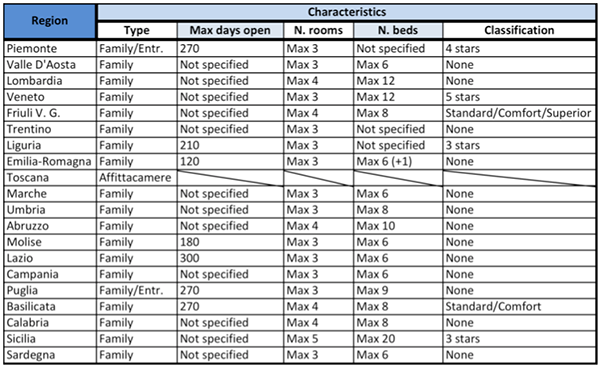 Another critical issue inevitably raised by the current legislative situation is the fact that most of the Regions decided to prohibit operators of B&Bs to serve any handmade food for breakfast. Operators are therefore obliged to serve only packaged food without any manipulation, meaning it is forbidden to bake a cake for their guests. This clearly makes it difficult to spread the culture of the place.