2.1 - The regulatory evolution of tourism in Italy

The constitutional reform of Title V (Constitutional Law n. 3/2001) has made tourism a matter of "exclusive" competence of the ordinary Regions, following the example of special-statute Regions, where this was already the norm before 2001. Tourism is thus one of the "residual" competences (art. 17, par. 4), in reference to which the Regions are no longer subject to the limits of the fundamental principles established by State laws. In 2005, the "competitiveness decree" has led to the establishment of a National Committee for Tourism (art. 12, par. 1) in order to coordinate the relevant policies at national level and adequately promote our tourism abroad.

The troubled birth and composition of the Committee and the subsequent declaration of unconstitutionality by the “Consulta” (judgment no. 214 of 2006) are the emblematic sign of connection difficulties between the different levels of government and confusion of roles in a strategic function, which is the coordination in the tourism field. In place of the National Committee, in 2006 the Committee of Tourism Policies was established; unlike the previous one, this was adopted in agreement with the Regions. Synthetically rebuilding the framework of today's Regions’ and local authorities’ administrative powers, it is possible to identify, despite the diversity of solutions, some common elements (Table 1).

The main organizational models are:

A second constant characterizing all the regional laws is the recognition of the central role of municipalities in the promotion of the integrated systems of tourism and the creation of public-private cooperation networks (Table 1). In fact, alongside the traditional Pro loco (local private-law associations promoting tourism and providing assistance to tourists), since a long time ago, other bodies for the promotion and tourist assistance in circumscribed territories (promoting a particular kind of service, a specific segment of the offer) operate at the local level.

The legal nature of these subjects is very diverse, but the importance given to local authorities, and in particular to municipalities, is similar. It is a trend that is in line with the strengthening of the competences of the municipalities, which, as the primary holders of the enhancement of the tourist economy of their territory, must take an active part in the implementation of measures aimed at the qualification of the local supply system and of the basic touristic services concerning information, tourist reception, the entertainment of guests, events, and promotional initiatives.

At this point, it is essential to mention the "Unioni di Prodotto" in the Emilia-Romagna Region (which we will analyze more in depth later in this chapter), aggregations of institutional and economic stakeholders (public and private) operating in the tourism market that elaborate promotion projects (managed by the public part) and foster integration through commercialization projects (managed by the private part). The so-called “Area companies” (Società d’Area) and the tourism associations and consortiums have similar aims.

Another important element of the Italian touristic structure is ENIT (Table 1), the National Tourism Organization. Established by Law no. 610 of 1921 and then reformed a few times, with the task of promoting and increasing foreign tourism in Italy, it was transformed into the National Tourism Agency with D.L. March 14, 2005, n. 35 (converted into Law no. 80 of 2005), operating at the service of both national and regional administrations. Finally, we should mention the IAT offices, which provide touristic information and leaflets (on hotels, restaurants, events, itineraries, etc.) about the province where it is located as well as about the Region. 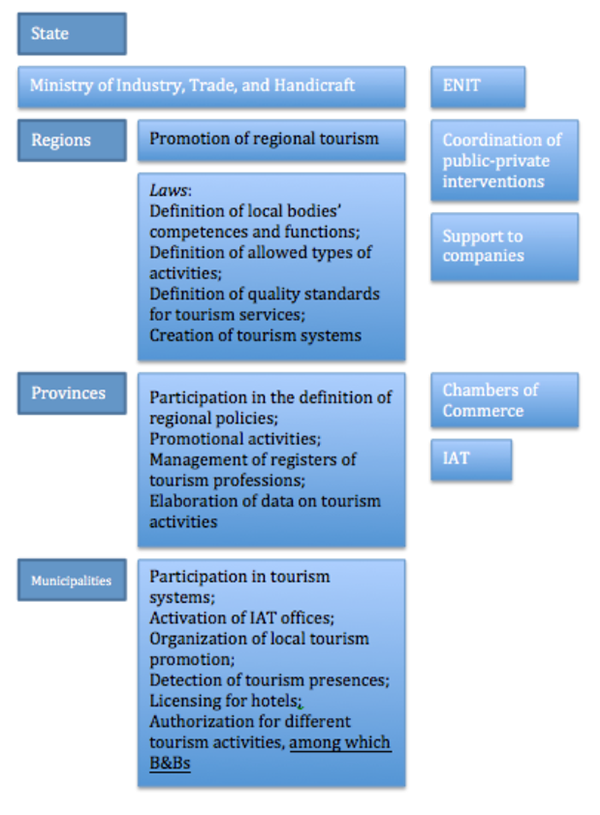