3.4.1 - Location of the Activity – Ravenna, Emilia-Romagna

Ravenna is a city in Emilia-Romagna, Italy. It is situated 44.41 latitude and 12.20 longitude and it is 9 meters above sea level. The population is around 90.000 inhabitants (9th biggest city in the region). Its well-preserved late Roman and Byzantine architecture is very famous. Eight UNESCO World Heritage Sites are located in Ravenna: the Mausoleum of Galla Placidia, the Neonian Baptistery, the Basilica of Sant’Apollinare Nuovo, the Arian Baptistery, the Archiepiscopal Chapel, the Mausoleum of Theodoric, the Church of San Vitale, and the Basilica of Sant’Apollinare in Classe. These “Early Christian Monuments” were built between the 5th and 6th centuries AD. For mosaic lovers, it is the best place to be: spread out over numerous churches and baptisteries, there is “one of the most dazzling collections of early Christian mosaic artwork in the world” (Lonely Planet).

The city annually hosts the Ravenna Festival (starting in mid May and usually lasting until mid October), with opera performances and concerts held inside ancient historical places like the Basilica of San Vitale and the Basilica of Sant’Apollinare in Classe. In literature, Ravenna is mentioned by a significant number of famous writers, such as Dante Alighieri (Canto V, Inferno), Thomas Middleton (he chose Ravenna as a setting for “The Witch”), Oscar Wilde (poem “Ravenna”), Lord Byron, T. S. Eliot, etc. As for accessibility, the commercial and tourist harbor of Ravenna is number one in Emilia-Romagna and a really important one in Italy (top 20) and Europe (top 40); the railway station is directly connected to Milan, Venice, Bologna, Rimini, Ferrara, Verona, Parma, and Lecce; freeways passing through Ravenna are A14-bis from Bologna, E45 from Rome, E55 from Venice, and SS-16 connecting Ferrara to Rimini.

The countryside around the city is an earthly paradise unbelievably rich in orchards, vineyards and endless meadows. We consider this location to be just perfect thanks to all the different types of activities offered, which generate interest in art-lovers, history-lovers, literature-lovers, nature-lovers, seaside-lovers, sports- lovers, fun-lovers, etc. The B&B would be next to the “Ronco” riverbank, in a place that is right in the middle among Ravenna city center, Cervia, Cesena, and Faenza, with ForlÃ¬ being the closer city (Figure 13). 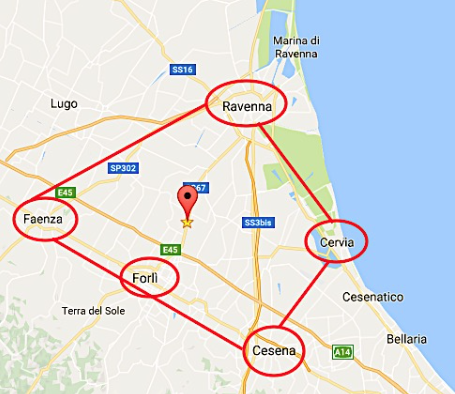