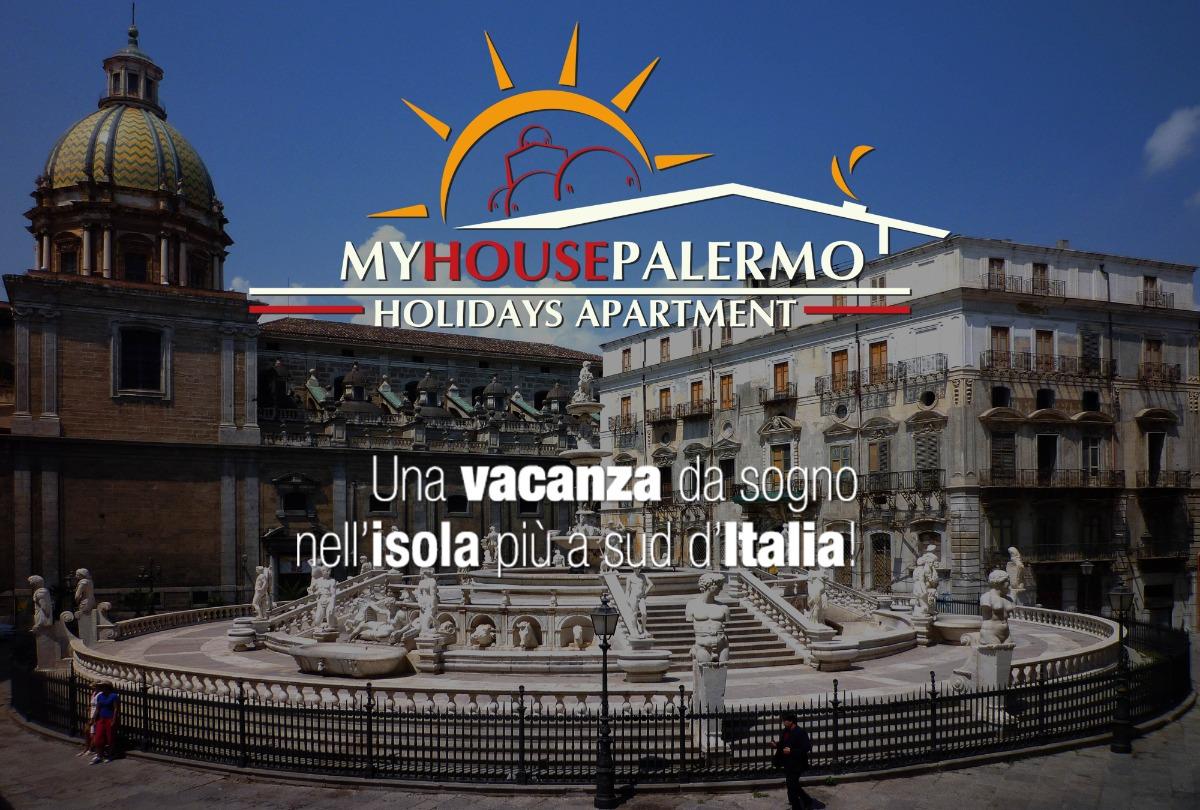 Location and style
Our holiday home is located in near the sea at Palermo art city, in an area of great history, architecture and culture, quiet, for enjoying a stunning panorama, in the heart of the city nearby Zisa. "My House Palermo" is a smart, welcoming venue.
Surroundings
Our location and the surrounding area offer our guests a chance to stroll and shop in the shopping streets enjoy local craft products, taste the typical local products thanks to the food and wine tours, explore cultural events and exhibitions, stroll in the quiet, lush gardens and beautiful landscapes.
Close by our guests will find several monuments and famous places.
Location
Our property is the ideal location all families on the move will feel right at home here, for conferences and business travel, for a dream vacation in a discreet, romantic setting.
Accommodation features
Our guests can take advantage of private bathroom not en-suite, free Wi-Fi, heated environment, reserved areas for smokers, freedom to return at leisure, car park, parking space, kitchenette, large terrace.

You may cancel your booking up to 7 days before the check-in date. In the case of failure to show or late cancellation, you will be charged a penalty of 50% of the total cost of the booking

Check-in from 4:00 PM to 8:00 PM
Check-out before 10:30 AM- If you're late you may be charged for an extra night
For a booking including breakfast, breakfast is served from 7:30 AM to 10:00 AM
Municipal tax is included in room rates
Only first linen change is provided
Extra towel changes, if requested, cost €10.00
Extra sheet changes, if requested, cost €10.00
Rooms cleaning is not provided during the stay
Final cleaning has a mandatory additional cost of 25.00 € per oom/accomodation
Extra room cleaning is available at a cost of €25.00
Meal preparation allowed in rooms
No guests allowed in rooms

Pets of small size (short-haired) only at certain times of year by prior agreement with the host
Well-behaved, not aggressive or noisy; pets may not sleep on beds; pets may not be left alone at the facility; pets should be with owners at all times
A daily cost of 5 € is due per pet with a one-time additional cost of 30 € for final cleaning

Number of rooms with own bathroom inside the room (ensuite):
2
*Declared by the Innkeeper
All Features

Hey from My House

Member since September 2017 | 12,300 hits
In the heart of the Mediterranean, the freedom of a holiday, the well-being of home. Apartments equipped with every comfort, ideal for spending your summer holidays by the sea in Palermo or even for a period of stay or work in the city. Available for daily or weekly rentals. Its strategic location is ideal for visiting the sights. Easily reachable from the Punta Raisi Falcone and Borsellino airport by taxi or bus, from the railway station and by sea the stop is near the house. We are located about 800 meters from the Politeama Theater. A few steps from the Zisa Cultural Sites. Located in a location, perfect to visit on foot all the monuments of major interest, the most beautiful shopping stores and the best restaurants and clubs in the city.

Welcome to the land of the sea sun and culture.
Telephone
WhatsApp
Facebook
Website
Send a message
My calendar is updated
Response rate: High
Response time: within an hour

The Zisa district of Palermo, located close to the historic city center, is located in the heart of Palermo.

It takes its name from the castle that is inside.

The whole area in which it extends was a holiday and hunting place for the sovereigns, so much so that, originally, the entire park stretched out just outside the walls and consisted of small groups of houses around the mills for grain and salt built along the course of the Gabriele torrent.

The area was quite populated, so much so that inside it more than a thousand people lived there.

From the lush garden that was, the area has grown rapidly and has become a populous neighborhood incorporated by the city.

A few steps from the apartments we find the Cantieri Culturali alla Zisa, a former industrial area of ??Palermo, located behind the Zisa Castle, an interesting example of industrial archeology, today an important cultural center of the city.

The structure was built to house the Officine Ducrot and the Ducrot Studio, in addition to the Ducrot Air Force, and includes 23 sheds inside which were created the Art Nouveau furniture among the most beautiful in Europe, designed by Ernesto Basile, as the furnishings of Montecitorio and of the large Florio cruise ships.

After the recovery and restructuring of the spaces in the 90s, followed by years of neglect and negligence by the city administration, today the Shipyards are a real citadel of culture, being the area used for exhibition purposes, for events theatrical, musical, cinematographic and cultural initiatives of all kinds.

Among its guests the Shipyards include the Institut FranÃ§ais de Palerme, the German cultural center Goethe-Institut, the Gramsci Sicilian Institute and its library and the headquarters of the National Film School in Palermo, or the Experimental Center of Cinematography.

The Cantieri Culturali also include the Cinema De Seta, the only public movie theater in Sicily, home to international events such as the "Sicilia Queer Film Fest", the "Soleluna - A bridge between cultures" and the "Efebo d 'Oro', and ZAC - Zisa Zona Arti Contemporanee, a space dedicated to the production of contemporary visual arts of national and international scope.

*Distances As The Crow Flies
This property has not been reviewed yet. Write a review.
Send a message