(5 reviews)
map
via supportico lopez, 20 - Napoli (NA) - Area: centro antico
+39
+39
Guests in this venue liked:
Description Breakfast
On the top floor of an old building located in the old centre of Naples, the view looks over rooftops and domes and looks east to Vesuvius and to the west to Castel Sant'Elmo and the Certosa di San Martino, which sit on a hill.

This recently renovated apartment is full of charm and pervaded by a Mediterranean and eclectic feeling.

On the breath taking terrace, majolica tables sit under a straw canopy; terracotta jars, planters, small vases and Sicilian ceramics bring Mediterranean essences together, along with aromatic jasmine and ancient roses. In the background there is the murmur of a small enchanting majolica fountain which evokes relaxation before and after a dip in the populous life of Naples below.

The four guest rooms are, air, water, fire and earth; the four elements, which are very strongly present in Naples. On the walls, paintings, prints and photos all exhibit images of Naples and its surroundings. The elements are present in the journey in the pursuit of the fire that hatches under Vesuvius, in the water that glitters in the gulf, above and below the swarming earth of traffic, with eyes to the sky in a city that is also a symbol, an atmosphere, an idea.

Located in the Borgo dei Vergini, also known as the Baroque village due to the predominant style of its architecture, itâ€™s a district in which many recognize the most authentic and real side of Naples, rich in cultural and artistic attractions, and from which you can reach San Gregorio Armenio and the Nativity Streets, Napoli Sotterranea, the Naples Cathedral, San Lorenzo Maggiore, San Domenico Maggiore, Santa Chiara, Cappella Sansevero, Spaccanapoli, MADRE the Museum of contemporary art and the National Archaeological Museum. The house is also close to the METRO lines 1 and 2 which then go all over the city.
You will find milk, tea, barley, cocoa, fruit juice, biscuits, rusks, loaves of bread, Nutella, eggs, butter, yogurt, cereals, fruit, sweets and Neapolitan coffee that can be prepared in a traditional coffee maker. Homemade fruit jams give a touch of authenticity as well as other local products. Items are always available at the buffet and not served, so you have no restrictions on your time and it gives you the pleasure of enjoying a cup of tea, a coffee or a fruit juice in the afternoon, or a herbal tea in the evening.
Rooms and Rates
Conditions
';

You may cancel your booking up to 14 days before the check-in date. In the case of failure to show or late cancellation, you will be charged for one night’s stay

Check-in after 9:30 AM
Check-out before 10:30 AM
For a booking including breakfast, breakfast is served from 4:30 AM to 12:00 PM
Municipal tax of €2.50 per person per night is applicable. Children aged under 14 do not pay municipal tax
Fresh towels every 3 days
Fresh sheets every 7 days
Extra towel changes, if requested, cost €0.00
Extra sheet changes, if requested, cost €0.00
Rooms are cleaned every 3 days. To allow staff to clean, we recommend leaving the room at 10:30 AM
Final cleaning is included in the price
Extra room cleaning is available at a cost of €0.00
No meal preparation allowed in rooms
No guests allowed in rooms

Check in from 9:30, please let us know when you will arrive. There is a â‚¬ 10 supplement from 22:30 to 00:30. Arrivals between 00.30am and 9.30am are unfortunately, not possible.
Staff are occasionally present during the day. Rooms are available from 15:00. Check out before 10:30am.
The apartment is on the top floor of an old building WITH LIFT. The staff that welcomes guests can help with luggage.
Breakfast self service

Features All Features
Number of rooms with own bathroom inside the room (ensuite):
4
Declared by the Innkeeper 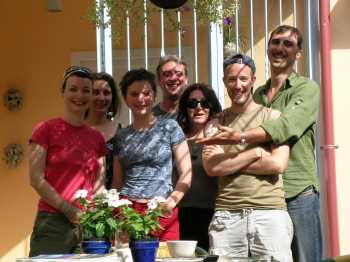 Write to Raffaele if you need to contact the host for more information or special requests before you book.
My calendar is updated
Response rate: High
Response time: within a few hours
Very good