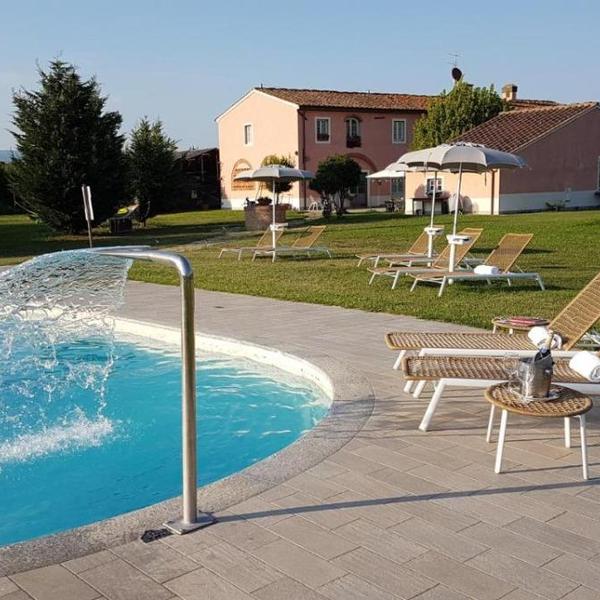 Casal Santâ€™ Elena is a former farmhouse that was completely renovated in 2009 and is operating today as a small family-owned bed and breakfast. This small countryside hotel with a private seasonal pool is situated in the Tuscan village Spianate â€“ Altopascio in the province of Lucca. We are near the main tourist attractions of Lucca, Pisa, Florence, San Gimignano, Vinci, Montecarlo, Viareggio, Forte dei Marmi, and Le Cinque Terre.. This makes our small family hotel the perfect place to plan your visit and daily excursions throughout Tuscany.

We are about 2 Km from the centre of Altopascio and from the A11 highway exit; close to the city, but at the same time in the tranquillity of the Tuscan countryside. Our small family hotel is located on 7 acres in the wonderful Tuscan countryside and is ideal for couples, friends, and larger families. This small family-run hotel features 12 rooms, a front desk open from 8 am to 8. 30 pm, a restaurant that serves a daily free continental breakfast, a large garden with a seasonal outdoor pool and deckchairs, 220 cm umbrella-shades and a large private parking.

We also try to promote as much as possible serving local and organic food in our family restaurant (open only during high season and high occupancy, primarly july and august) preferably using ingridients from our homegrown garden or through local producers in the area.

Choose between the 3 comfortable room types; the twin bed and king-size double rooms for single or double occupancy and the 2-bedroom family room that hosts up to 5 people, ideal for larger families with 2-3 children. Connecting rooms are available too.

If you are not traveling around and doing sightseeing in the Tuscany region, you surely will enjoy and relax in our garden and pool area cooling off in the outdoor hotel pool accompanied with a glass of local Chianti wine.

The venue is also ideal for banquets and weddings in Tuscany (catering service on request).

Our family and staff speak Italian and English and will be at your entire disposal to make your stay with us a memorable experience.

You may cancel your booking up to 7 days before the check-in date. In the case of failure to show or late cancellation, you will be charged a penalty of 100% of the total cost of the booking

Check-in from 3:00 PM to 9:00 PM
Check-out before 10:30 AM- If you're late you may be charged for an extra night
For a booking including breakfast, breakfast is served from 8:30 AM to 9:30 AM
No municipal tax will be charged
Fresh towels every 5 days
Fresh sheets every 5 days
Extra towel changes, if requested, cost €15.00
Extra sheet changes, if requested, cost €15.00
Rooms are cleaned every 2 days. To allow staff to clean, we recommend leaving the room at 11:30 AM
Final cleaning is included in the price
Extra room cleaning is available at a cost of €20.00
No meal preparation allowed in rooms
No guests allowed in rooms

Conditions for pets staying in this facility:
- pets of medium-small size for short periods by prior agreement with the host
- Well-behaved, not aggressive or noisy, kept on a leash, with pet passport, pets may not sleep on beds, pets may not be left alone at the facility, pets should be with owners at all times, pets are not allowed in communal spaces
- Garden, bowl
- A one-time additional cost of 25 € for final cleaning

Pets of medium-small size for short periods by prior agreement with the host
Well-behaved, not aggressive or noisy; kept on a leash; with pet passport; pets may not sleep on beds; pets may not be left alone at the facility; pets should be with owners at all times; pets are not allowed in communal spaces
Garden, bowl available
A one-time additional cost of 25 € for final cleaning

Number of rooms with own bathroom inside the room (ensuite):
10
*Declared by the Innkeeper
All Features

The Home Restaurant Service is available only during peak season (july and august) and depending on number of minimum reservations.

Member since June 2022 | 358 hits
We are a family running a small and managing a countryside residency with love, ready and willing to help and assist our guests, working with passion and without worries.
Telephone
WhatsApp
Website
Send a message
Response rate: High
Response time: within a day

Lucca
Only 25 kilometers away from Casale and you will get to Lucca, another small yet wonderful medieval city, with its monuments, the characteristic Piazza dellâ€™Anfiteatro, and its typical and elegant cafes that will take you to a dream atmosphere.

Via Francigena
The â€˜ Via Francigenaâ€™ or â€˜ Francigena Wayâ€™ is an ancient pilgrims way from north-western Europe to Rome. It is a group of trails and paths that together constituted a road system toward the city of Rome.

The particular Francigeno route most known today is the one indicated in A. D. 990 in the highly detailed travel diary of 97 legs of the journey written by Bishop Sigeric who traveled from Canterbury to Rome to be received at the papal throne.

From Casal Santâ€™Elena there are two sceneric legs that are worth the walk. From Lucca to Altopascio (19 km) and from Altopascio to San Miniato (29km).

Montecarlo
Only 9 kilometers from Casal Santâ€™elena away you arrive at his magnificent medieval town founded by Charles the IV.

Pisa
Pisa is only 35 km or thirty-five minutes away from the Casale. Itâ€™s a world-famous city for its timeless Leaning Tower of Pisa and for the Square of Miracles (Piazza Dei Miracoli) where the leaning tower is situated, along with the Baptistery and the Cathedral.

Florence
Only 60 kilometers from the Casale you can immerse yourself in the magic of Florence, one of the most beautiful cities in the world.

San Gimignano
At 70 km drive you reach the picturesque village and UNESCO World Heritage Site San Gimignano, with its village located almost entirely in its thirteenth-century walls. In addition to being a town full of history, it is called Medieval Manhattan for the number of towers in it (even today there are sixteen of the seventy two original towers). San Gimignano is still famous for being the home of Vernaccia di San Gimignano, white wine and much appreciated for its olive oil. Another point of interest for fans of video games, San Gimignano appears in environments of Assassinâ€™s Creed II, in which many of its monuments are featured.

Pistoia
29 km East from Casale. Pistoia is a town of the Roman age, with very interesting monuments and buildings to visit. The city of enchanted stone, wide streets, and beautiful churches were named the Italian Capital of Culture in 2017. In Pistoia, you discover plenty of churches, museums, palaces, and monuments. Enjoy a drink in one of the many bars that are located at the characteristic Piazza della Sala. The city celebrates every year in July the Pistoia Blues Festival with acts from internationally renowned artists and bands like Samantha Fish, Simple Minds, and many more.

Volterra
68 kilometers from our hotel. Volterra, famous for its alabaster and its Etruscan past, magnificently preserves its charm. In addition to the historical center of Etruscan origin, you can visit the Roman ruins and medieval buildings. In recent years an event of medieval inspiration called AD 1398, taking place on the second and third Sunday of August, attracts tons of people because the little town seems to plunge back into the Middle Ages.

Piaggio Museum Pontedera
24 km from Casale. Are you also crazy about the Italian Vespas ? Combine a day trip to Pisa and stop on the way just before arriving or on the way back at the Piaggio Museum. On the premises of the former industrial Pontedera complex you will encounter an entire collection of the Piaggio. Take a journey back in time to relive these iconic and famous Italian scooters.

Il Mare
Marina di Pisa, Castiglioncello, and the Versilia are just some of the main towns on the coast of Tuscany. Marina and Tirrenia in recent years have constantly received national recognition for its clean waters and shore, but also Castiglioncello or the white sandy beaches in Vada. If you want to combine the charm of Italy in years 50/60 and the sea you can drop in Versilia: Forte dei Marmi, Marina di Pietrasanta, Viareggio, places where it is easy to encounter some VIPs while enjoying a drink or stroll at dusk along alleys lined with famous boutiques.

Montecatini Terme
At 15 kilometers driving distance from the hotel. Tuscany is an area with a high concentration of thermal spas. Not far from the Casale you can enjoy a day of wellness and relaxation in some of the most renowned national spas: Montecatini Terme, San Giuliano Terme, and Casciana Terme. You only need to choose your favorite spot and enjoy one of the beauty treatments or spa massages, sauna and mud baths.

Parco Di Collodi â€“ Pinocchio Park
The Park of Pinocchio in Collodi is a famous park located at 16 km from our place. There you can immerse yourself in the timeless story of Pinocchio and relive the moments of the tale with your children. A timeless journey into one of the most beautiful fairy tales known throughout the world, written by Carlo Lorenzini (alias Collodi). In addition to the park, you can also visit the Garden of Garzoni and the Butterfly House.

Siena
100 kilometer drive south of Casal Santâ€™ Elena. Visit the city of Siena, which is known for its enormous historical, artistic and landscape heritage and also for the famous Palio, which takes place every year on the 2nd of July and 16th of August. An event attended by several historical city districts competing for final victory. Besides being very nice to experience, it is a very ancient and strong tradition for the Sienese people. Since 1995, the historic center of Siena has become UNESCOâ€™s world heritage.