(6 reviews)
map
Vico degli Albanesi, 6 - Lecce (LE) - Area: piazza sant'oronzo
+39
Guests in this venue liked:
Description
AN HISTORICAL RESIDENCE IN THE HEART OF LECCE
The Chiesa Greca Bed & Breakfast is located in a 14th-century building which has been magnificiently restored in a fashion which recalls the understated elegance of past times. The inimitable warm welcome associated with the Salento is reflected in the refinement of the rooms and the care given to the smallest architectural details.

Details in the furnishings, carefully selected to match the aristocratic architectural style of the Lecce Medieval period, create delightful living spaces with a feeling of casual glamour. The Chiesa Greca B&B is located in the oldest quarter of the historic centre of Lecce, only a few minutesâ€™ walk from both Piazza Santâ€™ Oronzo and the Basilica of Santa Croce.

Inside the building, remains of an underground olive-oil-press can still be seen, as well as the outline of a private chapel dating from the time of the edificeâ€™s construction; traces of the original frescoes can still be admired on the vaulted ceilings. Thanks to the painstaking restoration, the various stages of the buildingâ€™s history from its origins through to the present form are clearly visible.

A stay in the Chiesa Greca B&B allows one to enjoy the ancient origins of the building without forgoing any of the modern comforts and conveniences which one expects in contemporary living; the unique atmosphere of the walls and ceilings in Leccese stone provide an ambiente one will not find elsewhere. Lecceâ€™s famous sights, from Roman ruins to the Baroque jewels of the many churches and palaces, can be reached within just a few minutesâ€™ walk. In addition, the famous beaches and towns of the Salento, such as Gallipoli, Otranto, Santa Cesarea Terme, Castro and Santa Maria di Leuca, to name just a few, are not far away; numerous highways connect Lecce with the rest of the Salento. The list of destinations of historic interest or enjoyable recreation venues in the Salento is virtually endless.
Rooms and Rates
Conditions
';

You may cancel your booking up to 8 days before the check-in date. In the case of failure to show or late cancellation, the deposit or advance payment will not be refunded

Check-in from 12:00 PM to 7:30 PM
Check-out before 10:30 AM
For a booking including breakfast, breakfast is served from 7:30 AM to 11:30 AM
Municipal tax of €2.00 per person per night is applicable up to 5 consecutive days maximum. Children aged under 12 do not pay municipal tax
Fresh towels every 3 days
Fresh sheets every 7 days
Extra towel changes, if requested, cost €5.00
Extra sheet changes, if requested, cost €5.00
Rooms cleaning is not provided during the stay
Final cleaning is included in the price
Extra room cleaning is available at a cost of €0.00
Meal preparation allowed in rooms
No guests allowed in rooms

Features All Features Condizioni animali
Number of rooms with own bathroom inside the room (ensuite):
7
Declared by the Innkeeper 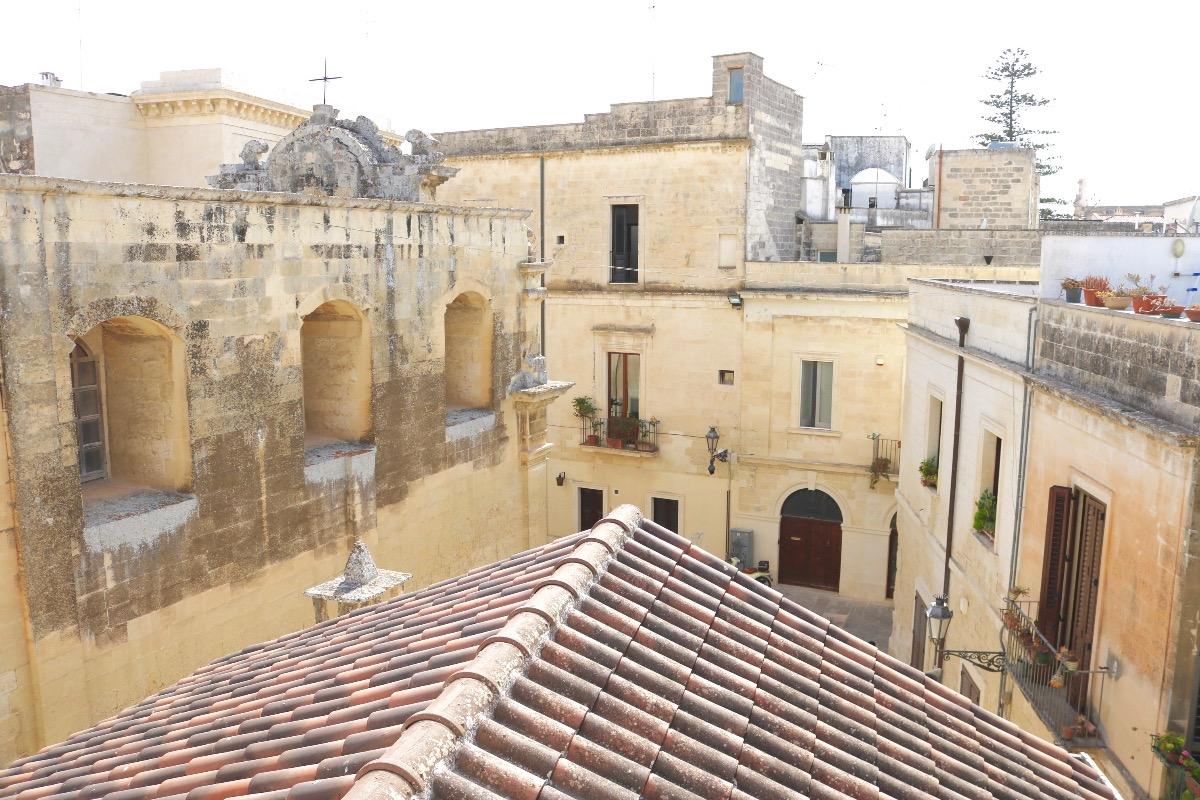 Write to Chiesagreca if you need to contact the host for more information or special requests.
My calendar is updated
Response rate: High
Response time: within a day
Excellent bettina
Property: 10 | Cleaning: 10 | Host: 10 | Location: 10 | Price/Quality: 10
Lovely apartment in the beautiful historic city center. The manageress was more than helpful, especially with the very strict parking rules. Looking back after one week in different b&b's in Puglia - this was the best - we entirely enjoyed it. Thank you!
stayed from 01/26/2020 to 01/28/2020 Our historic Palace from XVI situated in the heart of historic Lecce
**Easily accessible for those arriving by car from Brindisi and 10 min walk from the shuttle bus that connects to the airport**
Only 1 min walk to Basilica Santa Croce, just a few steps to Piazza Santâ€™Oronzo and Piazza Duomo â€“ Lecce two most famous squares